<
>
With extensive playing and coaching experience, Rob Bonneau enters his 18th season as a member of the Springfield Pics coaching staff and his sixth as the team’s general manager.

The Springfield native began his career with the Pics as a player from 1989-1993 before heading to the University of Massachusetts, where he played four seasons, scoring 72 goals and 94 assists for 166 points in 131 games, captaining the team his senior year. He then played seven pro seasons, including with Portland, Springfield, and Lowell in the American Hockey League, and won the Kelly Cup in the ECHL with the Hampton Roads Admirals in 1997.

Moving behind the bench for the Pics in 2004, success continued to follow Bonneau. He coached the AEJHL championship squad in 2005-06, and followed that with back-to-back titles in the IJHL in 2006-07 and 2007-08. The Pics moved to the Empire Junior Hockey League in 2009 under Bonneau and then to the USPHL in 2013.
​
Bonneau has coached over 100 players who have advanced to the NCAA ranks and beyond, including 2015 ECHL Defenseman of the Year Mike Little. Current NCAA Division I players who played under Bonneau include Boston College’s Ian Milosz and Northeastern’s Billy Carabino. 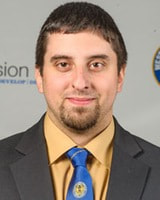 Chris Beaudoin is in his second season as Head Coach for the Elite squad, bringing years of junior hockey coaching experience.

An Enfield native, he spent his junior hockey career with the Pics
​
A 2011 graduate of Western New England, Beaudoin played forward and was a member of the Golden Bears hockey program before an injury in his senior year ended his collegiate career. Chris transferred to WNE from State University of New York at Potsdam. 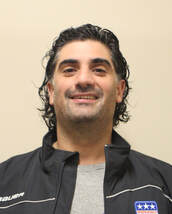 John Sarno is in his 9th season with the Pics.

A Springfield native, Sarno’s junior career began with the then-New England Junior Coyotes, and included stops in Traverse City in the NAHL and North Bay in the NOJHL.

Sarno’s pro hockey career took him all across Europe. After playing college hockey at Johnson and Wales, Sarno spent four seasons in France, playing for La Roche sur Yon, Nice, and then Cherbourg, as well as a pair of seasons in Switzerland with HC Valle Verzasca and HC Vallemaggia. While with HC Valle Verzasca, Sarno began his coaching career as a player-coach.
​
He returned to the United States in 2013 to take over the coaching duties of the new Pics U16 club along with his brother, and together they have been behind the bench for every game. Many of the players that the Sarnos have coached have advanced to higher levels of hockey in juniors and the NCAA. 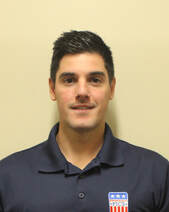 Anthony Sarno is in his 9th season with the Pics.

A Springfield native, Sarno’s junior career began with the then-New England Junior Coyotes, and included stops in Traverse City in the NAHL and North Bay in the NOJHL.

Sarno’s pro hockey career featured a season in France with his brother at La Roche sur Yon, before returning to embark on a seven-year pro career that included stops in the ECHL with Toledo and Johnstown, the SPHL with Pensacola, and the FHL with Akwesasne, Cape Cod, and Brooklyn. With the Warriors and Bluefins, Sarno began his coaching career as well, serving as player-coach.

He returned to Springfield in 2013 to take over the coaching duties of the new Pics U16 club along with his brother, and together they have been behind the bench for every game. Many of the players that the Sarnos have coached have advanced to higher levels of hockey in juniors and the NCAA.
​
Anthony also trains many of the local professional and college hockey talent. 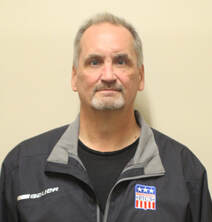 The Lethbridge, Alberta left-shot defenseman began his career in the Western Hockey League through the 1981 and 1984 seasons, during this time Vern was drafted by the New York Islanders in round two of the 1982 NHL draft.
Vern’s professional hockey career with the New York Islanders began with assignment to the Springfield Indians; where he played for several years alongside several talented players including the famed NHL coach Bruce Boudreau. Vern made his NHL appearance with the New York Islanders within their 1984-85 campaign.
​
Vern went on to play eight more years of professional hockey and finished with Capital District Islanders of Troy, N.Y. in the 1991-1992 season.
Vern’s deep experience of the game and coaching processes has helped develop hundreds of college hockey players including and most notably NHL defenseman Ron Hainsey currently of the Toronto Maple Leafs
A native of Palmer, Mass. Eric Richardson is in his fourth season as the Pics' Director of Communications and also fourth as the team's lead broadcaster. He also serves as the team's primary Public Address announcer for the U15 and U16 games. He also serves as a Public Address announcer for various hockey events at the Olympia Ice Center.
​
After graduating from Springfield Technical Community College in 2005, Richardson's media career started at his alma mater, American International College, where he graduated in 2010.  He served in the athletic communications department as primary color commentator for soccer, field hockey, basketball, ice hockey, softball, and baseball. He also served as backup play-by-play broadcaster for soccer and basketball.
Richardson graduated from AIC in 2010 with a Bachelor's in Business Management. He is the proud husband of his wife Brittani, and proud dad of their two daughters, Claire and Elisabeth.