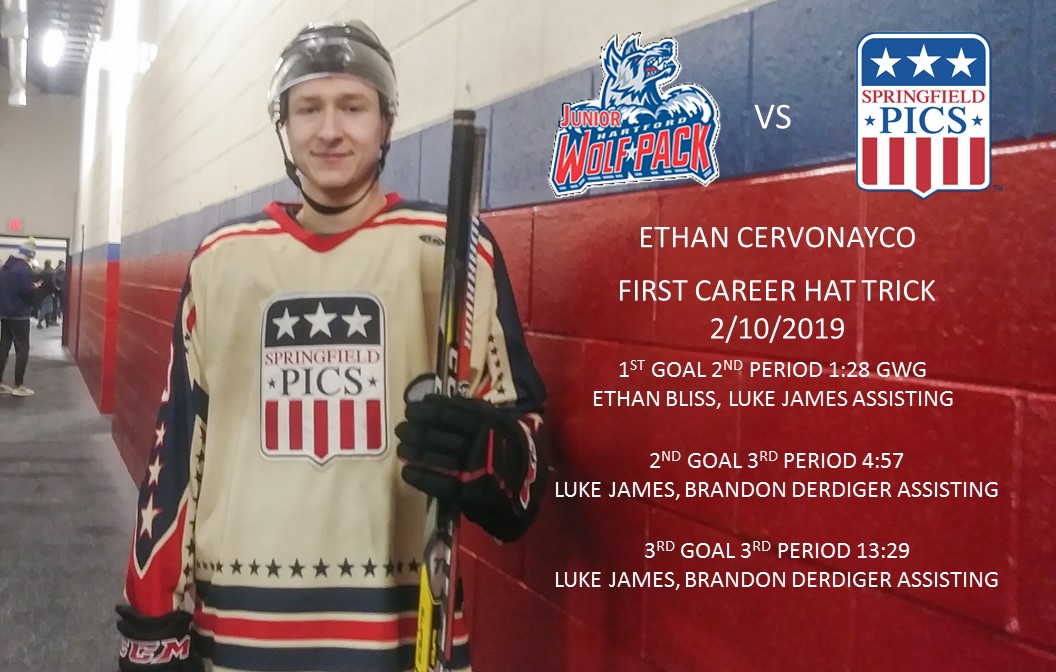 The Springfield Pics defeated the Hartford Junior Wolfpack 7-1 Saturday night, picking up the sweep after a true team effort.

The Wolfpack opened up the scoring midway through the first period. Cal Thompson put the puck in the back of the net on the opposite side of the goal, defending a shot attempt by Noah Gold. Gold instead passed it to Thompson who beat Pratt. Stephen Thibault got the secondary assist.

Cal Thompson got into a little bit of trouble himself as he was issued a major penalty and a game misconduct for butt-ending of the stick after a skirmish near the Pics bench.

Mike Wilson opened up the scoring frenzy in the opening minute of the 2nd period on the major power play, off a feed from Gene Bouthiette. Wilson beat Wolfpack goaltender Yonatan Reisinger stick side. Josh Miller got the secondary assist.

Ethan Cervonayco got his first goal of his hat trick not even a minute later off a rebound. Luke James won the face off and Ethan Bliss made a shot attempt and Reisinger got a piece of it, but not all of it.

Jake Conrad then got into the action at the 6:41 mark of the 2nd period off a drop pass, which appeared to deflect off another Pics initially. Josh Miller dropped it back to Conrad off a feed from Noe Turdjmann.

Josh Bliss then notched one a few seconds after a center ice face off after the puck went out of play off a number of Pics players trying to stuff it into the back of the net after a few rebound attempts. Dom Ingham and Alex Malinowski got the assists.

Cervonayco notched his second goal of the night at the 4:57 mark of the 3rd period off a rebound attempt in which Brandon Derdiger dished it off to Luke James who initially beat Reisinger but hit the crossbar. Cervonayco was crashing the net and saw the puck between the goal line and Reisinger and finished the job.

Gene Bouthiette then added to the measure at the 11:12 mark off a feed from Mike Wilson. Bouthiette took an intitial shot on Reisinger and was blocked but never got a hold of the puck. Bouthiette then capitalized on the loose puck and put it in the back of the net.

Cervonayco then finished his hat trick at the 13:29 mark of the 3rd. Cervonayco initially was the breaking man to the net but missed an initial feed attempt from Derdiger but it went to James. James then dished it back to Cervonayco after his initial shot was blocked and beat Reisinger stick side.

Resiniger got 27 saved in the loss, and Pics goal tender got 38 saves on the win.