WEST SPRINGFIELD, Massachusetts – It was a huge night at the Olympia for the Springfield Pics 18U and 16U teams, and the host squads rose to the occasion as Springfield swept the Islanders Hockey Club by scores of 4-1 and 5-3, respectively, on Friday, February 9. For the 16U team, the victory ensured that the team will finish no worse than second in the USPHL 16U North. 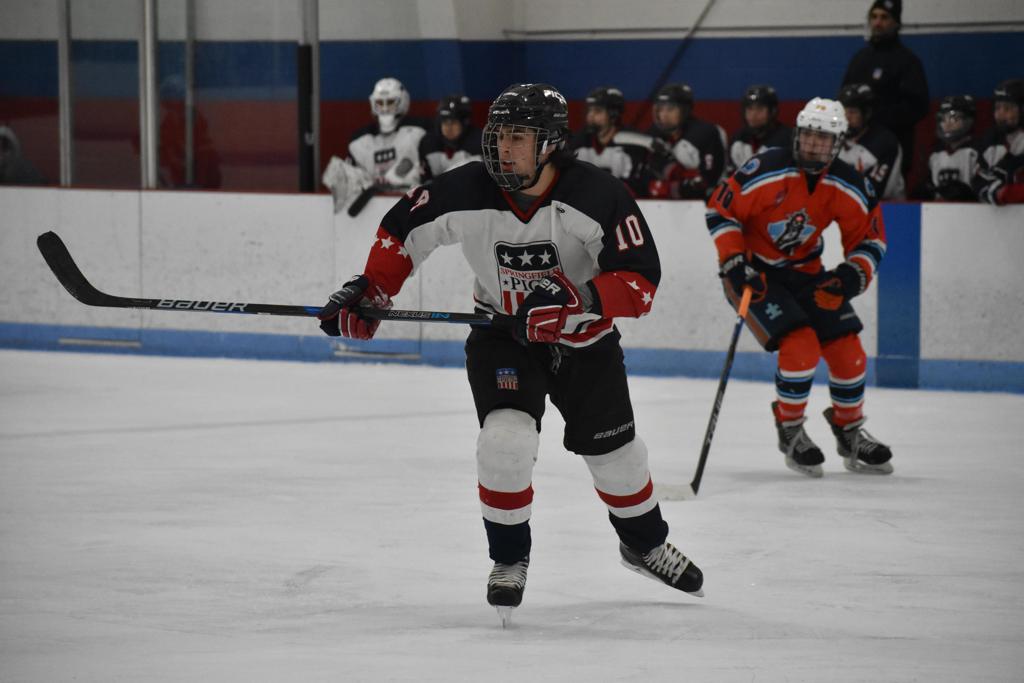 18U: The Islanders came out firing, but to no avail; after a scoreless first period, the Pics broke the deadlock early in the second on a goal by Nikita Kobzar at 2:33, set up by John Arciszewski and Kirill Gusarov.

The tally only increased the resolve of the visiting side, which had already recorded a 14-6 shot advantage through one period. The Islanders fired 25 shots in the middle frame, but none of them eluded goalkeeper Connor McAnanama, who held his ground through the first 34 minutes.

In the third, however, the Islanders finally broke through, drawing the game even at 5:10 on a goal by Kevin Sadovski. That would be the only blemish on the night for McAnanama; he ended up with 49 saves on 50 shots.

Later in the period, Dom Ingham took over. He snapped home what proved to be the decisive tally at 11:53 on the power play from Gusarov and Mario Kellner, and then added another at 14:46 from Noah Palmer and Chase Reynolds. The Islanders pulled their goalkeeper for a sixth attacker, but it was Springfield which scored the last of the game, as Alec Curry hit the empty net at 15:46 from Alan Meyer and Kellner to seal the win.

16U: Needing a win to cement second place and have any shot at winning the USPHL’s North Division, Springfield hit the scoresheet early and often. Cam Croteau got the red light flashing just 1:36 into the game, pounding in a rebound from Pavel Karasek, with Brock Baumann earning the other assist.

Later in the period, after Kyle Jarosz caused a turnover, Karasek sent Kyle Nelson in on a breakaway, and Nelson finished, scoring at 10:28 to extend the lead. The scene replayed itself shorthanded shortly thereafter, with Joshua Tisdell springing Spencer Korona for a shorthanded breakaway goal at 12:38, giving the hosts a 3-0 lead.

After a scoreless second frame, the Pics struck first in the third, with Baumann finishing in front on a power play from Karasek and Jarosz. It seemed like that would be the end of things, but the Islanders had other plans, striking on the power play at 9:14 to break the shutout courtesy of Alex Jefferies, and then cutting the lead to 4-2 just 20 seconds later on a Connor Gatto goal.

Coaches Anthony and John Sarno knew their team needed to regroup, and wisely called their timeout; it paid off, as under a minute later, Mark McClure and Korona would set up Croteau’s second of the game at 10:23 to restore the three goal edge.

That goal would be crucial; the Islanders once again scored, as Jefferies buried his second of the period at 13:32, and commenced a deluge of shots at the net thereafter, playing most of the final three minutes with an empty net and the extra attacker on.

It was in the final four minutes that Justin Prete really stepped up. He walled off the Islanders, making 15 of his 47 saves in the dying minutes of the third to seal the win and second place for the Pics.

NEXT UP: All four teams are in action, with three heading to Marlboro to face the Boston Junior Bruins. Puck drops are at 8:10, 8:30, and 8:50 p.m. for Elite, 16U, and Premier, respectively. The lone team not at the New England Sports Center will be the 18U squad, which hosts Islanders Hockey Club for a rematch at 6:00 p.m.