WEST SPRINGFIELD, Massachusetts – The Springfield Pics Premier and 18U squads each earned victories in a busy day for the Pics at the Olympia Ice Center, as the Premier team topped the Northern Cyclones 4-2 and the 18U team upended the Boston Bandits 4-0 on Saturday, January 13. 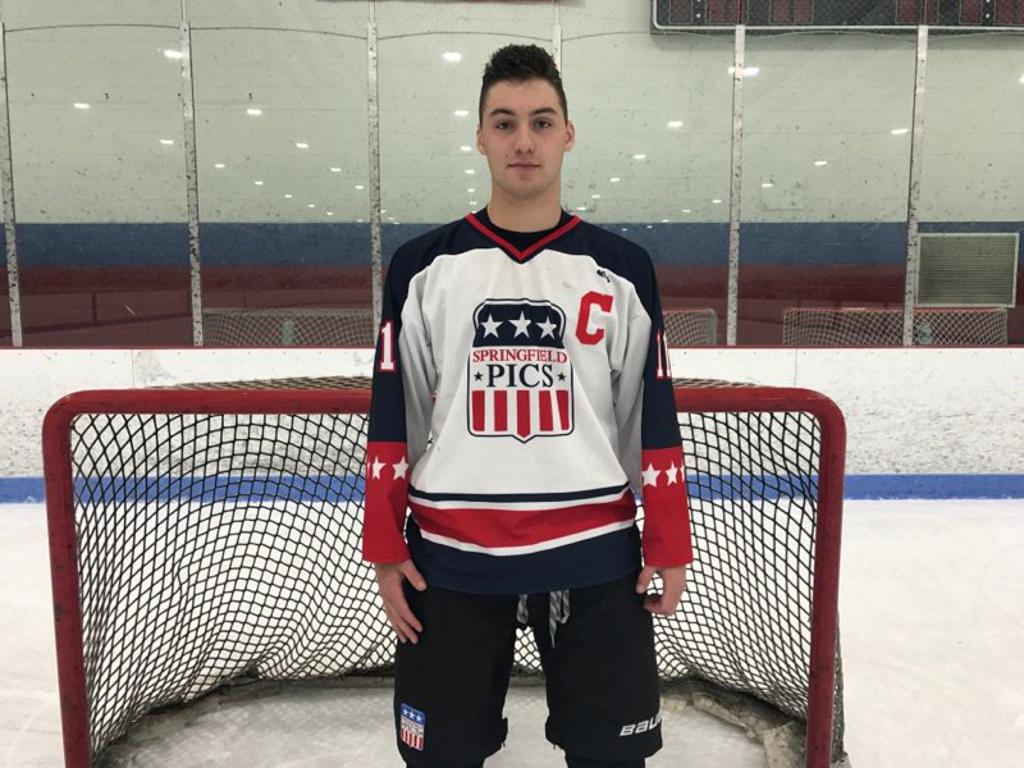 PREMIER: The captain was the center of attention as Grant DeWitt scored three times, including in the game’s first and final minute, to lead his team to a 4-2 win over the Northern Cyclones. He opened the scoring just 0:17 into the game after taking a pass from the left wing from Luke James and burying it to put the hosts ahead early. However, the Cyclones were able to take advantage of a five-on-three power play shortly thereafter to tie the game 1-1, and then scored on a 2-on-1 breakout to take a 2-1 lead into the intermission.

In the second period, Springfield came roaring back. DeWitt tied the game up midway through the frame, driving into the zone and firing a shot that was stopped, but deflected home the rebound chance that was taken by defenseman Josh Miller to tie the game. The Pics then took the lead on a fluke play less than two minutes later, as Ethan Cervonayco won a puck battle in the corner, and his pass in front hit a defender and found the back of the net. The two teams continued to push in the third period, but thanks to strong goaltending from Blake Carlson, the only goal of the final frame was DeWitt’s, a deal-sealing empty net tally to complete the scoring at 4-2 and cap the hat trick.

18U: Connor McAnanama made thirty saves and Alec Curry and Alan Meyer each had two goal periods as the Pics earned a 4-0 win against the Boston Bandits. In the first, McAnanama had to be perfect and he was, turning aside 11 shots in a scoreless frame. The game remained so until just over 11 minutes into the middle stanza, when Curry scored his first of the game. He added another a little over four minutes later to extend the lead to 2-0 heading into the final frame.

Meyer took over the game in the third, with the help of Max Moriarty, who assisted both of Meyer’s goals. He scored at 7:25 and 10:50 to put the game out of reach, and McAnanama made another 11 saves in the frame to seal the deal for the win.

16U: The lone setback of the night at the Olympia came against the 16U squad, which lost a wild 7-6 matchup against the Boston Bandits. Boston scored two goals in 18 seconds midway through the first, as Brett Williams and Zack Jones connected at 8:49 and 9:07 respectively. The visiting squad then extended the lead to 3-0 on a Cam Blanchard goal early in the second. From there, the teams traded goals in the period, as Pavel Karasek broke the shutout; Williams scored another goal, this one on the man-advantage, but Karasek netted another under a minute later. Zach Dill scored for the Bandits to again increase the lead to three, but Mark McClure tallied a late power-play goal to cut the deficit to 5-3 after two.

McClure was not done; he finished a power play at 1:41 of the third to bring the score to 5-4, only to see Jones net his second just over a minute later. The teams traded goals again, with Kyle Becker halving the shortcoming at 11:45, but Jonathan Stutzman responded a mere 58 seconds later. McClure completed the hat trick at 16:55, but the Pics came up just short in the 7-6 loss.

ELITE: The lone game away from Springfield for the Pics was for the Elite team, which faced the Islanders Hockey Club and suffered a 4-3 defeat. Andrew Roderigue opened the scoring for the Islanders, before Connor Rock tallied the tying goal for Springfield, but Grant Smith made it 2-1 for the hosts. The Islanders extended the lead to 3-1 early in the third, but Vinny Orlandi notched two quick goals, both from Gavin Rock, to tie the game up 3-3. Unfortunately, the last goal would belong to the Islanders, as Anthony Ceolin finished the scoring to give IHC the 4-3 win.

UP NEXT: The Premier team will host the Junior Bruins on Sunday, January 14 at 12:30 P.M. in Rink 2 of the Olympia Ice Center, with the Elite team’s rematch against the Islanders Hockey Club to follow thereafter. The 16U and 18U teams will head to Boston to face the Bandits, with respective start times of 12:30 P.M. and 2:20 P.M.