MARLBORO, Massachusetts – Springfield Pics Elite goalkeeper Nick Schulte turned in back-to-back shutouts, leading the way for a strong weekend as the Pics Premier and Elite squads competed at the USPHL’s Winter Showcase on December 5-7. Schulte earned Tier3JuniorHockey.com top goalkeeper of the week honors for his efforts, as he helped the Elite team go 3-1, while the Premier team finished strong despite a 1-3 record on the weekend. The Pics 16U team also had a weekend series against the Rochester Monarchs, splitting the weekend. 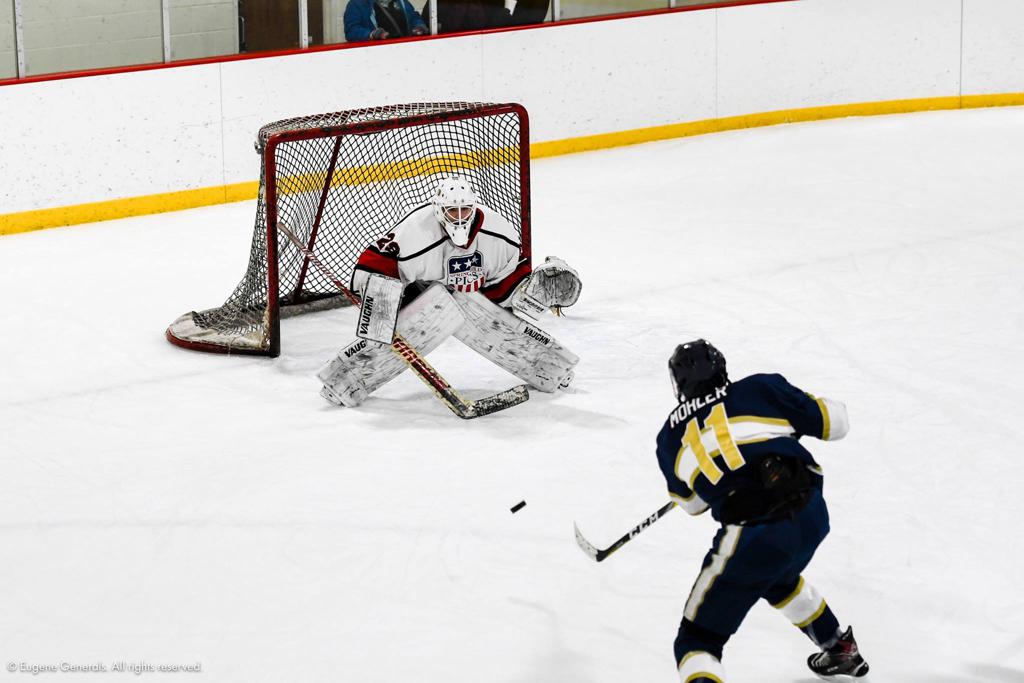 PREMIER: The Premier squad had some solid efforts, but fell in each of the team’s first three games, losing 3-0 to the Northern Cyclones, 5-1 to the Connecticut Nighthawks, and 1-0 to the Wisconsin Muskies before taking out their frustrations by blasting the P.A.L. Junior Islanders 11-0. Captain Grant Dewitt scored two goals and added four assists to lead the way on the weekend, Simon Berglind added a goal and four assists against the Islanders, and Luke James netted a hat trick in that game as well as an assist.

ELITE: A 3-1 performance on the weekend opened with two goal efforts by Tom Mileski and Branden Weeks in a 5-3 win over the Syracuse Stars; the Pics then scored three of the first five goals against the Beijing Shougang Eagles before surrendering the last four tallies in a 6-3 loss. The most incredible game of the weekend was against the Eugene Generals, where the Pics fired 49 shots and the Generals ripped 47; only two hit the target, and both were for Springfield, off of the sticks of Austin Lucas and Brett Geoffroy as Schulte made 49 stops. The Pics closed out the weekend by blanking the New York Aviators 2-0 as well, as Issac Anello and Andrew Wheeler tallied in that contest.

16U: While not at the USPHL Winter Showcase, the 16U Pics played twice in Rochester, New Hampshire, against the Monarchs on December 6-7. Kyle Jarosz scored Springfield’s only goal in the first game, which was decided in a shootout by a 1-0 score; Brenden Meyer netted the only goal on the final shot of the competition. Jarosz and Pavel Karasek would each have a goal and an assist in the next day’s game, but Rochester would net three to pull out a 3-2 win despite being outshot 37-13.

UP NEXT: All four teams are in action on January 13. The Premier Pics battle the Northern Cyclones at 6:00 p.m., the Elite Pics visit the Islanders Hockey Club to open a home-and-home at 6:10 p.m., the Boston Bandits battle the 18U squad at 4:10 p.m., while the 16U team also hosts the Bandits at 6:30 p.m. The Premier team will be on Rink 2 at the Olympia Ice Center, while the 18U and 16U teams will play on Rink 3.