WEST SPRINGFIELD, Massachusetts--The Springfield Pics are proud to announce that forward Mitch Morin’s hockey career will continue in Western Massachusetts, as the Chicopee native has committed to Western New England University for this fall. Morin scored once in his 22 games with the Pics in the Premier Division this season, and has spent his entire career with the organization, beginning with the Pics U16 program in 2013-14 and through the U18, USP3HL, and Premier Division ranks. 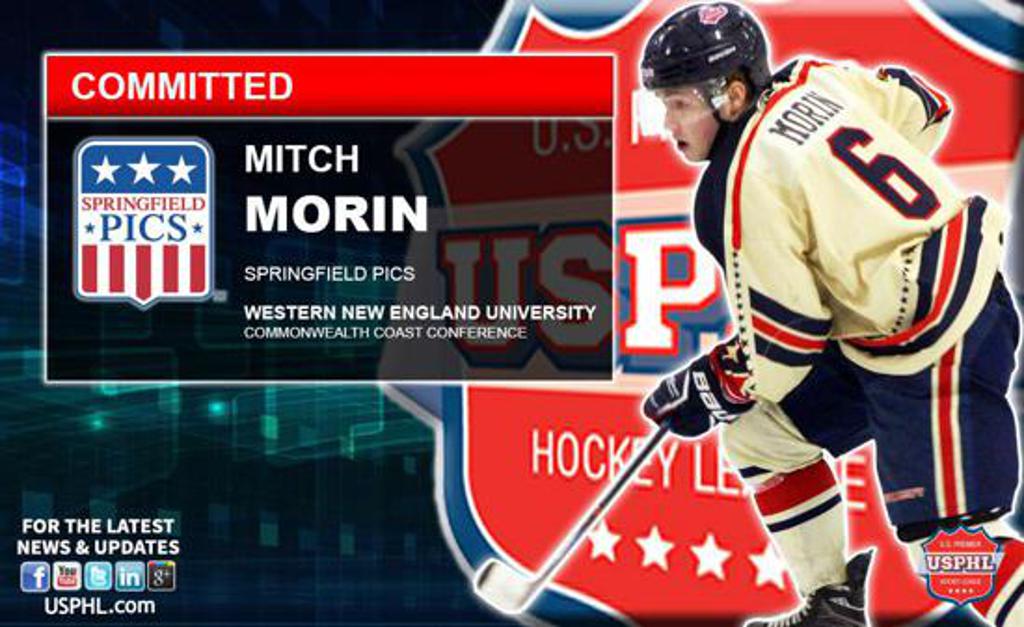 “I would like to personally thank the entire Springfield Pics organization for giving me the opportunity to play at an elite level. I would also like to thank Coach Bonneau and Coach Tabb for pushing me to be the best I can be every day; without them I wouldn't be where I am today. I have had a fantastic time playing for the Pics. It's definitely a first class organization. I would also like to thank my parents who have always supported me in my dream of playing college hockey. Without any of these people none of this would have been possible,” Morin said of his time in the organization.

Morin will be right at home, as the Golden Bears, members of the Commonwealth Coast Conference,  join the Pics in calling the Olympia Ice Center their home rink. He will be the third Pics alum on the roster in 2017-18, alongside Stefan Koproske and Eddie Rogers.

“We would like to congratulate Mitch and his family on this accomplishment. He is a product of the development model, having started out playing for Coaches John and Anthony Sarno with our 16U team, Coach Rob Bonneau with our 18U, spent time playing with our USP3 team, and had a great season with our Premier team this season,” said head coach Patrick Tabb, adding that “Mitch shows up to work each and every day; he has an elite work ethic on and off the ice, and is a true competitor. He proved people wrong daily. We wish him the best of luck with the Golden Bears!”