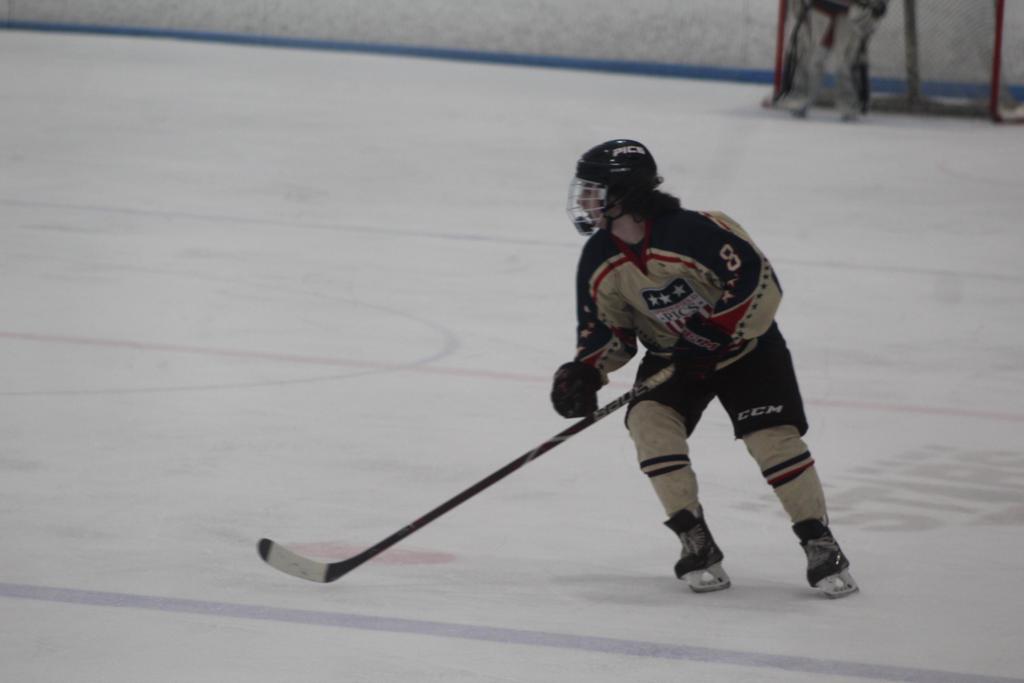 The Springfield Pics defeated the Connecticut Junior Rangers on Thursday afternoon, taking game one of the two game series 6 – 2 with a 32 save game from Matthew Jonas.

Owen Stacey opened up playoff play the same way he opened up the regular season, with a goal at the 8:36 mark of the first period when Owen Stacey intercepted the puck and dished it off to Ryan Moorhouse, and in a classic “give-and-go” return pass, hit it off Stacey’s skate and it went back onto his stick and placed it in the back of the net. Nico Rodrigues got the secondary assist.

Cooper Board then evened it up just 6 minutes later when it put it by Matthew Jonas.

Dom Ingham made it 2 – 1 in the waning seconds of the 1st period when Dom Ingham was able to line up dead center beyond the face off dots and put the puck in through several players screening Matthew Ayers. Ethan Bliss and Nicholas Lopes got the assists.

Nicholas Lopes got what would end up being the game winning goal, and made it 3 – 1 just under 5 minutes into the 2nd period when he was able to beat Ayers high and popped the water bottle. Lukas Radina and Josh Bliss got the assists.

William Niederhauser made it 3 – 2 just past the halfway point of the 2nd when he was able to score while on the power play. Nick Garzon got the assist.

Lukas Radina got the insurance goal just 29 second later when Julian Perino was able to intercept a pass and dish it off to Radina, who got in close and squeezed it between Ayers and the cross bar. Max Moriarty got the secondary assist.

Devids Jurinenokj made it 4 – 2 with just 3 minutes remaining in the 2nd when Devids was able to redirect a pass in front of the net to get it past Ayers. Owen Stacey and Joe Bouchard got the assists.

Max Moriarty put his name in the goal column with just under a minute remaining in the 2nd when he also got one past Ayers. Julian Perino and Lukas Radina both got the assists.

Matthew Ayers stopped 44 out of 50 shots in the loss.

These two teams face each other tomorrow at 1pm. If the Pics win, they go on to Nationals. If the Rangers win, they will play again Saturday at 6pm.