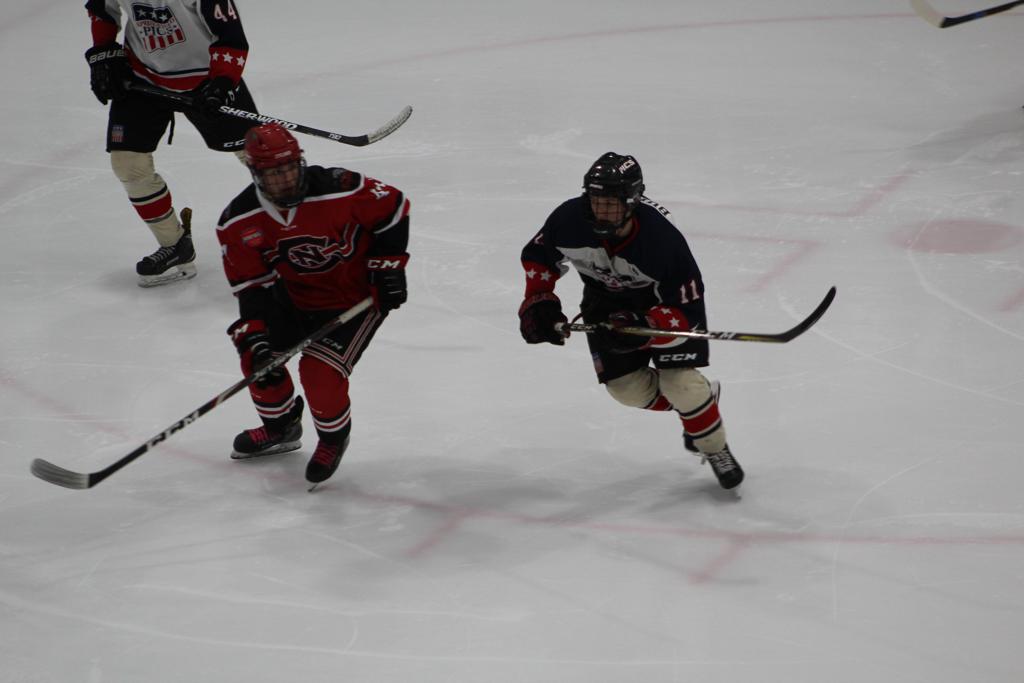 Aleksis Burkits did what many players want to do in the playoffs, get a hat trick. He achieved that, (in remarkable fashion, PPG, EV, SHG) in route to a Pics’s 6 – 1 win over the Boston Bandits Thursday Night.

Burkits opened the game with a “spin-a-roonie” goal when he got the puck from Adrian Brodnansky and spun around in place and put it past Bandits goaltender Chris McElroy. Connor O’Brien got the secondary assist.

Adrian Brodnansky got his second career goal as a Pic player, and what would end up being the game winning goal just five minutes later when Connor O’Brien came crashing down the left wing with the puck and Brodnansky crashed the center. O’Brien got tripped up and was able to dish it off to Brodnansky who deposited it in the back of the net. Austin Kareta was credited with the secondary assist.

Burkits got his second of the night at the 13:39 mark of the 1st when he was able to capitalize on the power play and got it past McElroy who was being screened. Luc Fricchione got the lone assist.

Connor O’Brien got his first goal of the night at the 34 second mark into the 2nd period when he received a quick pass from Burkits who was closing in on the net with the puck. McElroy committed to him and Burkits backhand passed it to O’Brien who one-timed it into the back of the net. Adrian Brodnansky got the assist.

Kevin Arndt broke the shutout with a goal at the 2:49 mark into the 2nd period with a slapshot from the blue line that beat Zalverson. Teagan Stringfellow and CJ Still got the assists.

Neither team scored for about 20 minutes until Burkits got the tail end of this hat trick at the 3:14 of the 3rd period on the penalty kill when he got the puck from Connor O’Brien immediately before he got checked into the boards. Burkits skated in front of McElroy and went cross net and deposited it low, stick side. It was the second shorthanded goal allowed by the Bandits this season.

Hunter Dodds closed out the scoring festival with just under 2 minutes remaining in the game when he was able to put one past McElroy on the power play. Gavin Rock and Sean Ferus were credited with the assists.

Zavelston stopped 34 out of 35 shots faced for the win, while McElroy stopped 35 out of 41 shots in the loss.

These two teams face each other again tonight at 8:30pm on rink 3 at the Olympia Ice Center.