Pics stun the 16U American field

The Springfield Pics defeated the New Jersey Rockets – Black squad on Sunday afternoon 6 - 2 to capture the U16 American Conference championship. 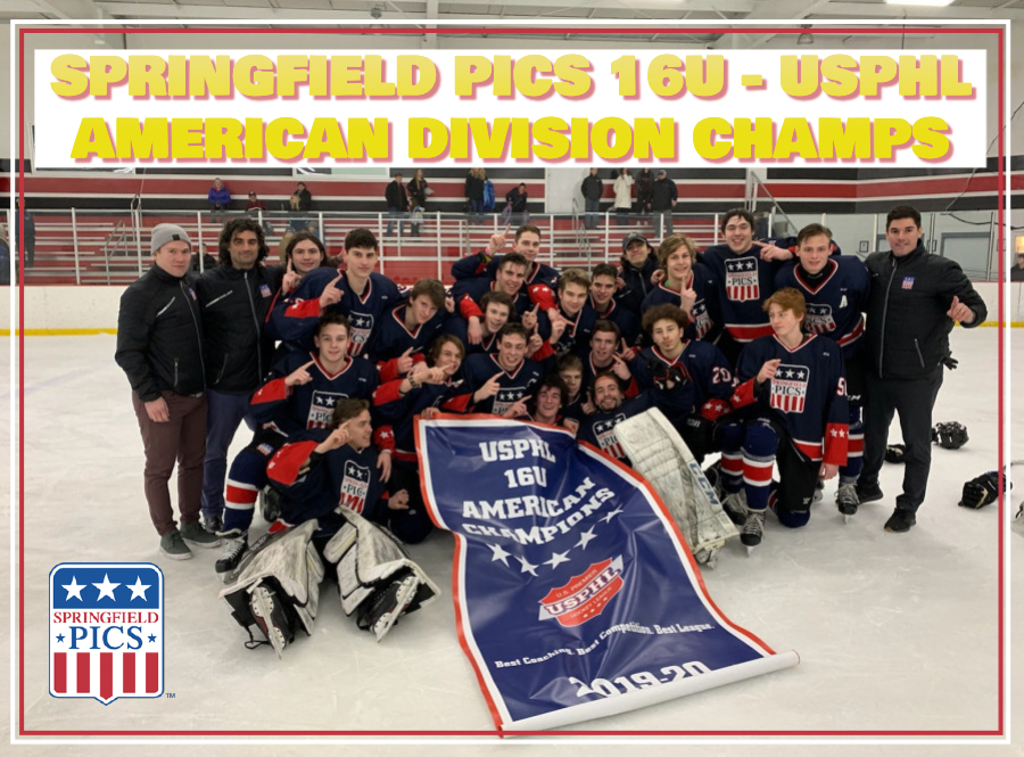 HOW THEY GOT THERE

After defeating the Jersey Shore Whalers a combined 15 – 0 the previous weekend, the Whalers were out for redemption.

Carter Hanrahan struck first for the Pics at the 5:21 mark of the 1st. Matus Hadusovsky got the lone assist.

Both teams then traded goals all the way to the midpoint of the 3rd when the Whalers’ Brenden Kearney tied it up at 3 a piece.

Andrej Julinek stopped 29 out of 32 shots for the tie.

The Springfield Pics turned a lot of heads when they defeated the previously unbeaten Rockets Hockey Club Black team in overtime on Saturday night, a fitting end to a dramatic Round Robin over Friday and Saturday at the Bridgewater (Mass.) Ice Arena.

Springfield Pics and USPHL 16U all-time leading scorer Carter Hanrahan scored his second goal of the game 13:21 into overtime as the Pics handed the Rockets Black their first loss of the season with a 5-4 win.

The Pics made the semifinals just by advancing to overtime but Hanrahan’s OT winner added frosting on the cake, giving them home ice on Sunday morning.

Mike Penna assisted on Hanrahan’s overtime tally and had three assists; Jan Hunor and Andrii Leutukhov lit the lamp and Tyler Cortis made 39 saves for the Pics

After handing the Rockets Black their first loss of the season on Saturday, the Pics continued their brilliant playoff run advancing to the Championship game with a 4-1 win over the PAL Islanders Sunday morning. Matus Hadusovsky led the way for the Pics with two goals and Andrej Julinek made 26 saves for the win.

After a scoreless first period, the Pics scored three consecutive goals - two just 1:34 apart - in the second period to bust the game open and lead 3-0 after two periods of play. Rihards Purgailis scored 1:17 into the middle frame and then Jan Hunor made it 2-0 Pics 10:56 into the period. Hadusovsky scored his first of the game at 12:30.

Hadusovsky would light the lamp again at 5:31 of the third period to make it 4-0. The Islanders finally solved Julinek at 10:04 of the final frame when Dylan Bridgewood scored but it was too little, too late and the Pics were on to the Final.

“We did everything that coach said, so we won,” Hadusovsky said following the game.

On Saturday, the Springfield Pics 16U team became the only USPHL team to beat the New Jersey Rockets Black 16U team - which is actually the Rockets’ 15U team - this season. The Pics won that game, 5-4 in overtime in Round Robin action.

On Sunday, the Pics did it again, but this time with much more at stake. The Pics completed their improbable playoff sweep of the Rockets Black with a convincing 6-2 win to capture the 2019-20 16U USPHL American Championship.

“We’ve been working our behinds off this whole time and we’re bringing it home,” co-captain Mike Penna said.

Dominick Balboni had two goals; Rihards Purgalis had two goals and an assist and Matus Hadusovsky and Carter Hanrahan each had a goal and an assist for the Pics. Andrej Julienk was stellar again between the pipes making 29 saves in the final. John Prue scored both Rockets Black goals.

The Pics set the tone early as Balboni and Purgailis scored 1:17 apart late in the opening frame to send the Pic into the second period up 2-0. Prue cut the lead in half at 10:28 of the middle frame but Purgailis struck again at 13:25 to regain the two-goal lead for the Pics.

Hadusovsky made it 4-1 Pics 5:40 into the third period and Balboni lit the lamp again at 10:16. Prue would make it 5-2 at 14:00 but Hanrahan finished his monster season with an empty-netter with 31 seconds left in regulation.