Springfield/Foxboro, MA – The Springfield Pics Premier, Elite, and U16 squads all played this past weekend, with the Premier and Elite squad splitting in weekend action on opposite days while the U16 squad extended their winning streak to 7 games, shutting out their opponents both nights. Matus Hadusovsky also hit the 50 career league point mark on Sunday. 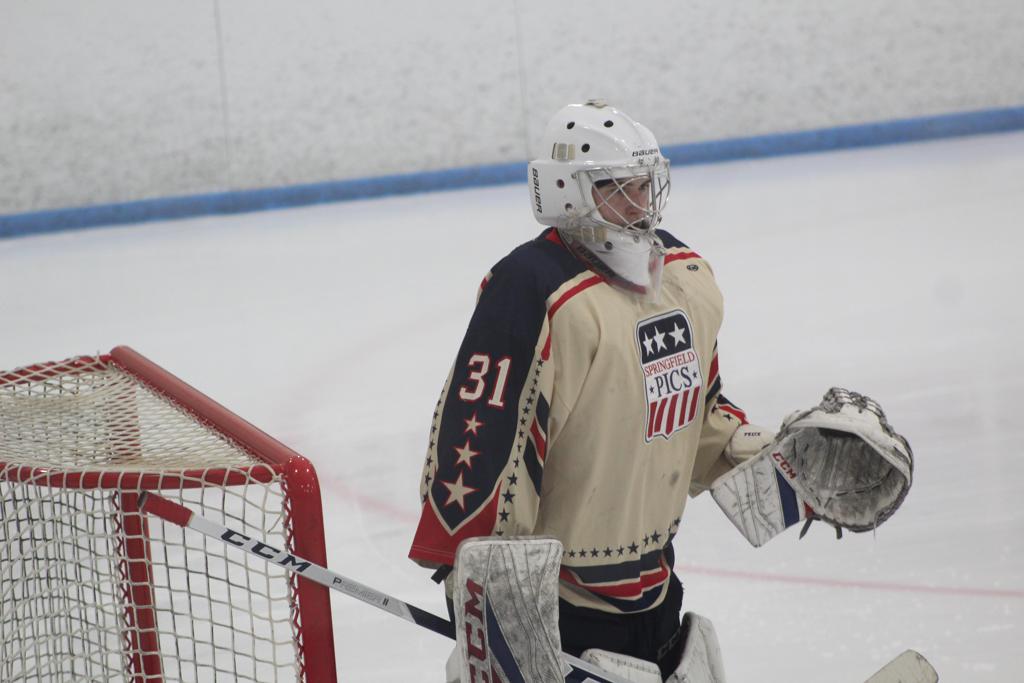 The Premier squad battled hard, but lost to the Boston Bandits 8 – 1. Owen Stacey was the only Pics player to score, spoiling the shutout for Austin Strom at the 7:08 mark of the 2nd period on the power play. Joe Bouchard and Devids Jurinenokj were credited with the assists.

The Premier squad enacted revenge from their loss the previous night upon the Connecticut Junior Rangers, defeating them 4 – 2.

Lukas Radina opened up the scoring on the power play, attempting a cross pass that took a hop and angled behind Rangers goaltender Matthew Ayers surprising everyone on the ice. Max Moriarty and Cam Gaylor were credited with the assists.

Just over a minute later, Rangers forward Dalton Silby slipped one past Matthew Jonas. Maxandre Pelletier and Alexander Dube were credited with the assists.

The Pics were the only team to score in the 2nd period, with the second goal being what would be the game winning goal.

Chase Reynolds opened up the 2nd period with a goal a minute and a half into the action. Matthew Kowal and Max Moriarty were credited with the assists.

Ethan Bliss then potted one in the back of the net in what would be the game winning goal with just under 6 minutes to go in the period. Devid Jurinenokj and Brandon Derdiger were credited with the assists.

Egor Khomyakov brought the Rangers within one midway through the final period of regulation during a power play. Ryley Lewis got the assist.

Max Moriarty sealed the deal with an empty net goal with 3 seconds left. Lukas Radina and Cam Gaylor got the assists. Ayers stopped 36 out of 39 shots in the loss, while Matthew Jonas stopped 23 out of 25 shots for the win. The Premier squad plays Friday and Saturday night against the Aviators, and Sunday the Rangers return to the Olympia. Eric Richardson will provide the action on HockeyTV.

Noah Palmer opened up the frame a nearly 6 minutes into the 2nd period off a feed from Louis Pelland. Aleksis Burkits got the secondary assist.

Luc Fricchione then got what would be the game winning goal with just 7 minutes left to the period. Hunter Dodds and Sean Ferus were credited with the assists.

Kade Bacon got the insurance goal under a minute later. Paud O’Brien and Adam Lindahl were credited with the secondary assists.

The 3rd period was the only time the Bandits scored. Dylan Desilva spoiled the shutout just 2:35 into the 3rd. Kevin Miller got the assist.

Sam Zavelson got the win, stopping 23 shots. Chris McElroy got the loss, stopping 15 out of 18 shots. Mike Varveris got the no decision, stopping all 18 shots he faced.

The Northern Cyclones heard the call from the Bandits and avenged their loss by defeating the Pics 5 – 2 Sunday afternoon.

Brian Clougherty opened up the scoring just 3:31 into the game. John DiFilippo got the assist.

With just under 4 minutes remaining in the 1st, Adam Lindahl scored on the breakaway tying up the game.

The Cyclones scored twice in the 2nd period. Grady Fagan scored just two minutes into the frame. Jacob Howell and Nick Super got the assists.

Just five minutes later, Clougherty scored again. Hunter Meyer and Joseph Heinzelman got the assists in what would be the game winning goal.

Just about three minutes into the 3rd period, Fagan scored again. Clougherty and Howell got the assists.

Mike Giordano then shut the door at the 13:13 mark of the final period of regulation.

Chirstian Vail got the win, stopping 30 shots, while Cameron Schnopp got the loss, stopping 40 shots.

The Elite squad has the Junior Bruins visit on Friday night, and the Cyclones return on Sunday. Sunday’s action will be carried on HockeyTV. Eric Richardson will provide the call.

The Pics traveled to Foxboro, and defeated the league leading South Shore Kings 5 – 0 on Sunday afternoon.

The Pics travel to Bridgewater on Sunday. The Pics have to win out to capture the league regular season title. Carter Hanaran is 4 points away from 100 career league points. He is on pace to achieve it either Sunday or at the All-Star game.